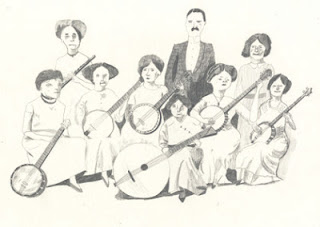 I have great admiration and fondness for Tim's work. Not only is it very good but it uses silent film narrative as inspiration. These two pictures also show group music making. the pleasure and the community ... the difference and the unity.
A fellow lover of music making and music making, and especially folk music, I relate very strongly to Tim's pictures of these women playing banjo in a group and his more mixed band below. Brass instruments can be hard to depict in pencil, so fair play to him. I love the clarinets - and the faces are so different and beautiful in their expression. Look at their moustaches, their chins, their eyesockets, their cheekbones. These parts of the face are so important for musicians who have resonance, technique, expression to consider. Music making takes over the face.

My granddad was a cello player in the Halle and I grew up with the mystique of photos of him playing in the orchestra, and earlier as a dance band and as part of a quartet. He was 'Uncle Sydney' in a BBC string quartet. So these pictures stir up deep personal feelings inside me. And they make me think, thank goodness I'm lucky enough to be a music maker too and to play with other musicians.

Thank you to Tim and also to all the musicians I have been lucky enough to play with over the years. And especially to those I work with now, I'm thinking of Matt Armstrong, Mark Braby, Paul Wady, Joanna McCormick, Richard Sanderson and to all the singers in the Collegium Musicum of London.
. 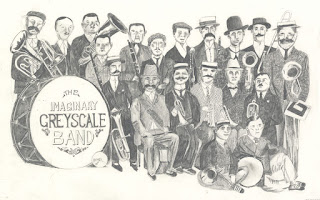