Anne Ford - music, and being unconventional, can save your head ...

After writing about Francesca Caccini, I thought I might dally my toes for a little while in some of the history of rather interesting female musicians and poets.

I have been an admirer of the very unconventional Ann Ford for some time. She played the viola da gamba, and English guitar and defied her father to perform in public.

Her infatuated lover wanted her to become his mistress and when she refused, he tried to sabotage her concerts. What an arsehole. How typical.

Anyway she ended up getting married as it helped her do what she really wanted to do. Unfortunately, when they were travelling to Italy, her husband died in Boulogne. This was the middle of the Reign of Terror and she got imprisoned. I'm not quite sure how these two facts are related, but never mind. The important fact in my opnion was that she was later released under a pardon for prisoners that could prove they could earn their living. Hurrah for her being a professional musician. Three hurrahs!

Fortunately she was painted by Thomas Gainsborough. This was just as well, as I expect I would never have heard of her otherwise. 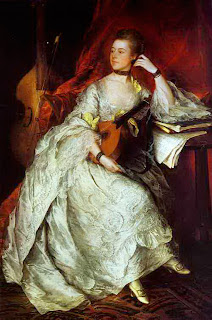 Posted by Jude Cowan Montague at 22:38