Emma Hurok is Eddie's grandma and she is a wonderful singer. I'm just listening to the opening of an interview of hers which Eddie has sent to me ... she's got a lovely speaking voice too. As Eddie says, her delivery is sardonic and humorous. I would have really liked to meet her. For her music and more information visit her reverbnation page.

Eddie has put up some lovely pictures. There's an amazing picture of Emma as a young girl holding a basket in a photographer's studio. Shades of Little Red Riding Hood. 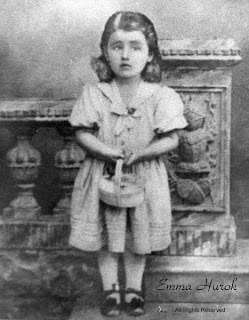 I asked Eddie about his grandma and he said that she was very matter of fact. My grandma was too, she was Scottish. Emma used to wear dark blue sunglasses inside like the early directors of film. There's a story about this that's familiar to silent film historians. Let me use Eddie's words to tell it as I love the way he puts it:

"Hollywood directors used them and wore them so often in the days of B&W film.. because the blue would remove the colors and give them a perspective of what the scene would look like in B&W ... well the stars and showbiz people didnt understand this.. and thought it was the new "IN" Fad to wear Blue sunglasses.. so celebrities began wearing Blue Sunglasses all over the place.. unaware they were initially used for a purpose they were in the dark ... so to speak ... about."