I used to sing to the saluang when I was in Sumatra Barat. When I was talking about it to a friend yesterday he asked me what one is. The most that Westerners usually know of Indonesian music is the gamelan, or gong orchestra.

The saluang is a bamboo flute which is played using circular breathing. It's very beautiful. It has a soft breathy burble. Then the singer joins the saluang in a nasal tone and sings almost in unison, but there is so much ornamentation and interpretation this is not unison as in the Western interpretation.

I love singing saluang music although I haven't done it properly for such a long time. I have some old cassettes but they don't have the power of music made sitting cross legged in a street market and singing to the mountains as the sun goes down.

It's the instrument of the Minangkabau. I loved staying with my menang friends. They are a real matrilinear people. The house stays with the women who run the household, not just in a cooking/cleaning capacity. The men are traditionally welcomed as guests and very much feel this. They are honoured, served the meals etc, but they also feel that transience of their existence in which they are almost a visitor in the home. Often they have to go off and earn their living. Of course this is my impression but it was a very strong one.

Here's a chap playing a saluang at the kind of gathering I used to join in with. Although we didn't have so much techhie equipment in my day. 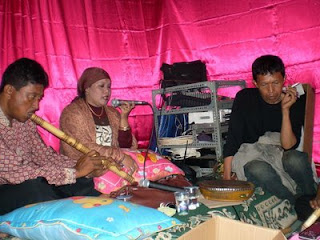 Posted by Jude Cowan Montague at 01:24