Beatnik Chicks (in The Beats - a Graphic History, published in New York, 2010, by Hill and Wang)
This graphic story by Joyce Brabner is an intriguing account of the lives of women in of the Beat scene, which is better known through the male protagonists –Kerouac, Burroughs, Cassidy and Ginsberg. Brabner writes ‘I found Kerouac and his cronies loathsome, they drive, roll joints, roll around with women, fascinate their buddies with stories … told in jazz jargon, amphetamine argot … self styled odysseans whose abandoned children grew up angry’.
The chapter opens with a sketch of a Mad Magazine cover from 1961, described as a year of great changes: ‘Turn the numbers upside down and they still read the same, turn a culture upside down and everything is different - squares versus hipsters...’
Brabner gives a personal perspective of the ways Beat culture has influenced her own life. She describes how she was inspired, as a child, by a comic strip narration of ‘Suzuki Beanie - the adventures of a Beatnik Girl’. There are two charming, near identical, drawings of Brabner as a young girl and today, she is now in her fifties, in both she wears the Beatnik uniform of ‘blunt cut bangs, black dresses and black tights, heavy framed glasses and all black clothes. They (Beat Chicks) were something to laugh at – many were too serious and too smart.’
One of the main drawings of the chapter puts the female associates of the Beat scene centre stage as it shows a fantasy gathering of Carolyn Cassidy, Diane Diprima, Hettie Jones, Joan Kerouac and Joyce Johnson. Brabner notes that ‘these women were not absurd ornaments, they and others ‘made much possible for women like me.’
Brabner is not indiscriminately admiring. She confesses that Diane Di Prima’s invented erotic adventures made her yawn. She found her later work, which focuses on motherhood, more appealing.
Brabner recounts some tragic stories including that of Elise Cowan. Elise was a poet who had a brief affair with the ‘seductive, young charmer Alan Ginsberg’. The couple posed for photos whimsically pretending to be twins. Elise typed up the 112 long lines of Ginsberg’s epic poem, Howl. ‘It takes a while for Elise to realise there have no future together,’ Brabner writes, ‘Allen is queer’ . Elise suffered depression and went on a journey across America characterized by narcotic stimulation and bizarre behaviour. Brabner draws this dramatically and effectively as a downward spiralling vortex. This particular road trip was not celebrated, even by the Beats. Brabner notes, in a comment which acts as an inditement of the beat scene, ‘Elise was outsider to the outsiders.’
This is a tantalizing introduction to these women’s lives. The Graphic format is a vivid and economical way to present information and opinion and matches the subject matter.
The book as a whole is beautifully produced to a high quality. It is well worth attention and is particularly topical with the release of the film Howl. The chapter on Ginsberg was drawn by Harvey Pekar (Brabner’s late husband; the couple are probably best known through the film American Splendour). Several artists contributed to the book, including the singer- songwriter Jeffery Lewis. The variety of drawing styles adds visual texture. While featuring the giants of the scene most prominently lesser known associates of the scene are also portrayed. All the authors celebrate the Beats while acknowledging their faults. Brabner is the most forthright in her portrayal of the ways hipster culture often perpetuated the misogyny of mainstream society. 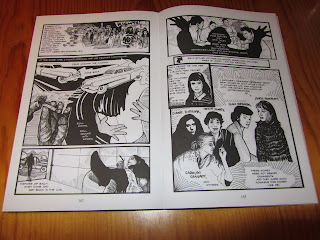 Posted by Jude Cowan Montague at 14:56