Today went to pick up a little nipping press from a chap in Cold Blow Lane, Bexley way. After we went for a short walk with the dog on Dartford Heath, but the roads were too near, so we drove a little further to Joyden's Wood and had a great walk around Faesten Dic, the dyke built by the Anglo-Saxons to keep the Romano-British troops away and one of the six Grimsditches around London. The Anglo-Saxons it says, would raid the area. Then when the Romano-British troops pursued them they would have to dismount to get through the dyke. And then they'd be trapped at the bottom of the steep 'V'. Joyden's Wood is unusual. It didn't use to be woodland, 'only' for 500 years. Before that it was heathland and chalkmines. So the earth has many mounds and ditches and feels rather like an old war or industrial landscape, when the earth has been scarred and altered by people, but nature has overlaid the structure with trees and shrubs. 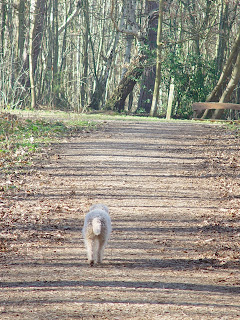 Posted by Jude Cowan Montague at 06:20