One of my more recently discovered heroines of la musique is Aster Aweke. Yes again I've found her by listening to Late Junction, what would I do without that show? She's from Ethiopia and uses a lovely vocal texture.

I love the way she sings over band music. She is always light in her treatment, which is difficult when you sing over a loud band. Listening to her has made me want to sing with a band for the first time in many many years. Would have to be the right players though. Maybe I'll ask some old friends if they might let me have a shot.

I'm really into a song of hers on youtube called 'Emiyee' which has a rather eeky poppy jazzy accompaniment but her vocals are just so delicate and strong. I would like to get her new album. Fiona Talkington keeps playing tracks from it and it has great traditional music accompaniment which I adore. 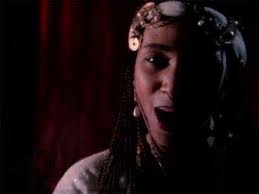 Posted by Jude Cowan Montague at 10:12